Some relevant details about social processes – the challenges we face

On the long term the increase of the world population will peak at 9 billion people according to the latest projections from the United Nations. This raises the problem of the regional and age dispersion of the population. Mid-term calculations show that until 2050 Europe will lose its current positions regarding to population share (see table). In 2050 Europe with its 632 million citizens will have only 7 percent of the world population compared to 22 percent in 1950, and 12 percent in 2000. But who are the winners and the losers (continent level) of this trend globally? Concerning the change of the population Africa’s growth rate will be the fastest. Its population ratio will increase from 13 (2000) to 20 percent (2050). Asia will lose its population growth momentum, Chinese strict birth control has had its effect, Chinese population will stop at 1.4 billion. In the case of the other regions (Northern-, Central- and South America; Australia) population willdecline, or stagnate. 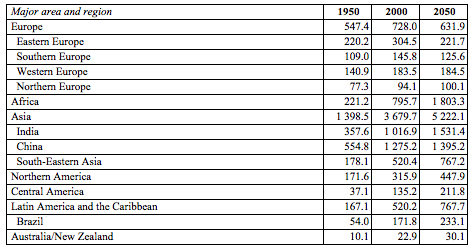 The global migration (cross-country and inter continent) significantly effects the demographic trends (Salt 2003), as we see the trends of the net reproduction rate. Northern America (i.e., the United States and Canada) is the only region that will not experience negative growth, mainly due to projected migration up to 2050. (United Nations 2004). Migration adds 0.5 percentage points to the population growth rate for period 2000-2050. Regarding to migration figures the position of the European continent is weaker than that of Northern America,  confirming the population trends as well. Migration adds to the growth rate by 0.1-0.2 points. Some forecasts (United Nations 2004) predict a trend that migration terminates to 2050. It is mainly due to the strict immigration policy of the European Union and the United States which causes radical turn in migration flows in the future.

Increasing number and share of aging populations is not just a challenge of the developed economies but on the  long term of developing countries as well. There are three factors underlying this trend:

According to the data of the United Nations the elderly population (60 years and over) will increase in 2050 by 10 points to 32 percent (comparing as the total population) in the developed region, and by 11 points to 20 percent in the developing countries. Currently the median age[1] of the population shows a large scatter 18 year in Africa and 43 year in Europe but in a long term (until 2150) age differences will disappear between the developed and the developing regions and become equal in 45 and 50 years. Aging society means not just lower participation rate and saving rates but slower economic development (Bloom et.al, 2011a) not only in the developed but also in the developing world. Another research emphasized that not the changing age structure is the problem, but the structural character, namely the low level of employment.

In the last decades Europe lost its position in the share of the global population, but was able to maintain its economic importance until the global financial-economic downturn in 2008[2]. Additionally Europe is facing an increasing global competition as stated in the European Union Strategy Papers the Lisbon Strategy and the Europe 2020 are formulated.

The main issues for Europe are the aging society and the high level of unemployment in the southern periphery hence the problem of the old dependency ratio respect the social and health expenditures. If we compare the health expectancy at birth with the healthy years at birth we can confirm that life expectancy is growing but it is coupled with an increasing number of people who need health care services. In addition to the population trends, immigration to the EU27 and internal migration among the member states has significant social and economic  consequences. Large numbers of people are looking for a new home to get a new job or a better life. Most of them are in an active age (15-64) that means additional workforce to an aging society (Eurostat 2013).

At the end of this short analysis let me expose some facts and questions about the sustainable social and economic development in Europe:

This blogpost is based on the Working Paper under edition in the framework of the project called “Prospects of the Visegrad cooperation in changing economic, political and social Conditions” No. 31210045 financed by the International Visegrad Fund.

[1] Median age is the age that divides a population into two numerically equal groups - that is, half the people are younger than this age and half are older. It is a single index that summarizes the age distribution of a population.

[2] The share of the European Union from the global GDP was around 30 percent from the 1960 until 2008, since than the ratio has been dramatically reduced to 23 percent in 2012 (source: United Nation, World Development Indicators Statistics, June 2013)