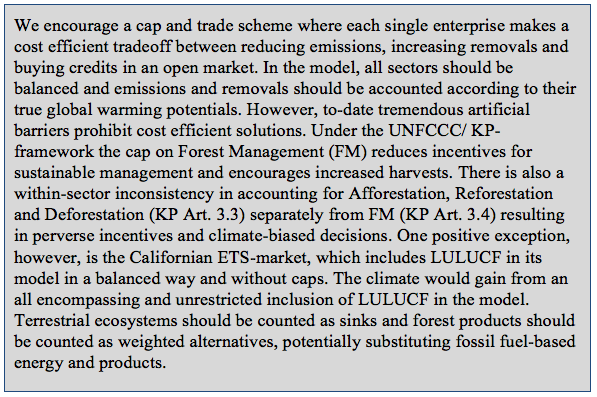 Due to photosynthesis, forests and forest products play an important role in climate change mitigation. In Sweden the annual gross removal from living tree biomass is currently about 165 Million Metric tons of CO2-equivalent (MtCO2e) per year. This can be compared to the reported net emission from other sectors, (energy, industry, agriculture, and waste) to the UNFCCC of around 65 MtCO2e per year. A large proportion of the growth is used in products that at least partly substitute fossil fuel based products. After accounting for the harvest, the net annual growth of living biomass results in a net removal of approximately 30 MtCO2e per year.

We argue that a carbon accounting model should encourage reduced emissions and increased removals. One carbon equivalent emission unit should be equally balanced against one removal unit. Such a weighting would reward each component in the system relative to its real climate change mitigation potential. In order to promote cost efficient solutions, accounting in the Land Use, Land-Use Change and Forestry (LULUCF) sector should be balanced with other sectors. We favor collapsing all activities currently defined in the Kyoto Protocol (KP), in particular Articles 3.3 (the net of Afforestation, Reforestation and Deforestation on new Forest Lands) and 3.4 (Forest Management lands), into one all-encompassing pool and including any currently omitted carbon pools (e.g. Cropland, Grazing land, Wet and Peat lands, Unmanaged Forest Lands) in the system. It is important to create incentives to improve carbon sequestration rates where possible and at the most cost-effective rate. Within the forest sector, there are also several goods and services such as biodiversity and recreation that should be considered.

Neither the KP nor the suggested new EU-accounting framework mobilizes the efficient use of forests and the LULUCF sector more broadly for climate change mitigation. The major obstacle is the cap, which eliminates any incentive for maintaining a high or increasing rate of forest growth. From a carbon accounting perspective, a country like Sweden is encouraged to either increase harvests, decrease growth (or both). For Article 3.3 activities, there are incentives to increase growth in new forests (Afforestation or reforestation) and to reduce deforestation. We support this. But we do not understand why most of the existing carbon and potential carbon growth in existing forests are excluded? All afforestation/ reforestation, deforestation and especially existing forests are important in the climate policy framework. Moreover, Article 3.3 activities represent only a minute share of the world’s forests and potential future forest growth.

The long-term benefits from supporting and incorporating forestry derive from the potential for substitution for fossil fuel-based products. When a landowner regenerates forest s/he should be credited for the carbon sequestration (net removal) in forest biomass (the forest carbon sink). When trees get older, respiration increases (raising emissions/reducing removals). For foresters, there are well-recognized optimal rotation periods that maximize biomass production (and thus minimize forest emissions). From a climate perspective, it makes more sense to harvest old trees and replant the land with new ones. Harvested trees should be used for substituting carbon intensive products (in particular cement and steel) and for bio-energy. Accurately weighting all these components of the forest value chain relative to their true global warming (cooling) potential will help promote higher rates of carbon sequestration (net removals) and help increase the total forest-based carbon sink.

We do not argue, however, that the principal goal should be to increase “forest sinks”. Rather, we argue in favor of finding an optimal balance between maximum growth and fossil fuel substitution. Landowners should be credited when growing forests and debited at harvest. Harvested wood products (HWP) should be included in the accounting model in order to create incentives for the use of household and construction related forest products that sequester carbon.

Many arguments against including forestry in climate accounting models have been raised. One is that “forest sinks” are not permanent. We argue, however, that forest sinks should not be increased forever. Instead, there should be incentives for sustainable and high rates of forest growth. Sweden confirms the example that forest growth can be both high and sustained over longer periods of time. Forest growth has gradually increased in Sweden since 1923, when the national Forest Inventory was first established, all the way up to the current day. This has happened within a relatively stable and unchanging forest area and, for the most part, without fertilization. Even if “forest sinks” are not permanent, as long as harvest is appropriately debited in the carbon accounting system, disincentives against permanence are present in the system.

Another obstacle is found in the KP (Articles 3.3. and 3.4), which argues that only human induced carbon credits/debits should be counted. We believe that all emissions and removals influence climate change mitigation and should thus be included in the model. Historically, however, the largest sector of human-induced forest growth is clearly in the Forest Management sector. But due to the cap, the lion’s share of this potential forest growth is excluded from the system.

If forestry is eventually included in an all-encompassing and balanced carbon accounting model, all Party emission reduction commitments should likewise be revised. This will protect against the oft-repeated concern that ‘Parties [countries] should not gain from undeserved forest growth’. This should not be difficult, since the new reference level model adopted in Durban essentially defines a pre-determined amount of forest growth that Parties expect to achieve without significant efforts. Including this estimated amount in the general emission reduction commitments, but allowing countries and individuals the freedom to decide where to focus their principal emission reduction efforts, should go a long way to improving the relative effectiveness and cost-efficiency of the current system. Moreover, since it was decided in Doha that Parties should consider revising their “commitments” for the second commitment period by April 2015, this provides an opportunity for the early integration of LULUCF into the climate policy framework of the EU and other countries/Parties.

The exclusion of forestry and other forest-related carbon pools from the general climate policy framework fails to mobilize an important and ultimately natural contribution to the climate change mitigation (and adaptation) struggle. Given the relative urgency of the climate challenge, we can only wonder at the relative magnitude of this missed opportunity.