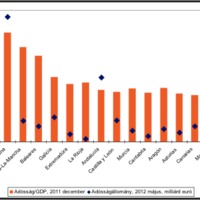 A Spanish bailout - To request or not to request?

That is the question for Spain. The prime minister is apparently hesitating to ask officially for the available bailout possibility. This opportunity became available on the 6th of September with Mario Draghi’s (president of the European Central Bank) announcement concerning additional liquidity-preserving measures towards EU member states. These measures, known as Outright Monetary Transactions (OMT’s), will be carried out subject to the following principal conditions:

These conditions are more favourable than ever before. Spain now has the option to receive a bailout for its banking system, unlike Greece, Portugal and Ireland. This ECB action was developed in particular because of Spanish (and Italian) indebtedness and because of strong pressure from international markets. In August the high Spanish risk premium (the spread between 10-year Spanish goverment bonds and 10-year German bonds) made debt-financing extremely costly (see Figure 1). 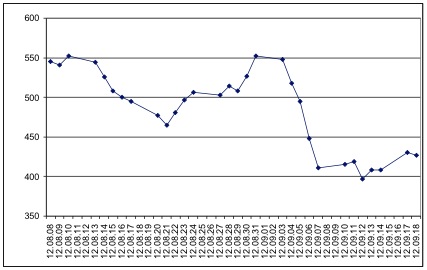 Apart from the above problems, Catalonia and other Spanish regions have openly admitted to running out of money and have asked for a “regional bailout” from the Autonomous Liquidity Fund created by the Spanish government in July. This Fund has 18 billion euros in capital and, under strict conditions, can lend money to regional governments. Several Spanish autonomous communities are severely indebted and have difficulties paying educational and social transfers, as well as health services. As time passes, it is well imaginable that the capital of the Liquidity Fund will not be enough to cover the needs of every region requring assistance …

To top it all off, news articles and data have been published on massive capital flight from Spain. In the first half of 2012, 219.8 billion euros more capital left the country (approximately 22% of the yearly GDP) than flowed inward. Most of these flows originated from portfolio divestments, deposits, and credits by foreigners. This illustrates that foreign investor trust has rapidly weakened.

Mario Draghi’s announcement was greeted by the markets with an immediate fall in the Spanish risk premium (see Figure 1). Several days afterwards, Spanish companies took advantage of this favourable trend and rushed to take out relatively cheap loans.

So why did the Spanish government not seize the opportunity at once? Nobody really knows the answer. The Spanish press is rife with speculation. The most probable explanation is that the prime minister, Mariano Rajoy, is playing a cunning game. There are pros and cons associated with requesting the bailout and he appears to be pondering the possibilities. 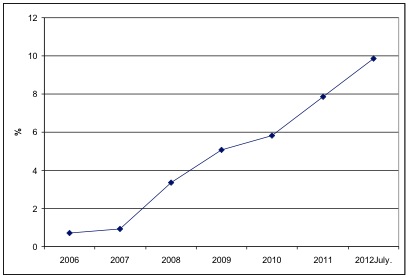 On the one hand, receiving the money would be a relief for the banks. On the 18th of September, the Bank of Spain published new data on the stock of bad debt in the banking system. It was found to be higher than ever, 9.86% of total debt (see Figure 2). As can been seen in the Figure, as time has passed since 2008, the ratio of bad to total debt has not declined. But after 2010, it began to increase even more rapidly than before.  No wonder there is significant pressure on the Spanish government, both from the domestic side and from the EU-side, to ask for the bailout.

National political factors can however interfere. There will be elections in Galicia and the Basque Country at the end of October. And the request for a bailout could send a bad signal, while not quite admitting failure and incompetence on the part of the ruling party. As many will remember: in spring, Rajoy was deliberately late with announcing the Spanish budget because he was waiting for the results of the elections in Andalusia.

Apart from these points, the government may be trying to bargain up until the last moment. Perhaps more favourable bailout conditions can still be won. So everything is prepared for the official step of requesting, but behind the scenes informal negotiations are going on full speed.

The patience of financial markets is not infinite. It is also not sure that this patience will last until the end of October. A lot depends on the upcoming data on the financial and economic situation of the country. It is possible that prime minister Rajoy will not be clever enough in this game. “There are more things in heaven and earth, Horatio, than are dreamt of in your philosophy.”